Working with students in a virtual world: Summer School 2021

The school traditionally opens its doors to students who attend schools in Lambeth, Southwark and Lewisham for five days during the first week of the summer holidays. Due to the COVID-19 pandemic, and necessary social distancing restrictions the delivery of the school in its usual ‘hands-on’ format wasn’t possible again this year. It was therefore decided that the BRC would work with partners to deliver the Summer School content via a mixture of live MS Team lessons, YouTube videos and practical tasks to be completed at home. 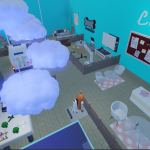 A student’s design for their dream children’s hospital

We opened the school with a welcome speech from the public engagement manager and a former summer school attendee/YPAG member. The students then met Patient and Public Engagement Specialists from the Trust and the Evelina London to take part in a live debate entitled ‘How can we build our digital future?’ The purpose of the session was to discuss the students’ ideas on the redevelopment of the Evelina London and to seek feedback on the Trust’s Apollo Programme.

The third live lesson was ‘Mapping the brain with neuroimaging’, delivered by a research fellow at The Medical Research Council (MRC) Centre for Neurodevelopmental Disorders at King’s College London.

The entire second day was led by the team at the School of Biomedical Engineering and Imaging Sciences at King’s College London. Students took part in a range of interactive activities such as learning about the heart and blood flow whilst making an origami heart and working in teams with DJs to lay down some music together based on MRI scanning machine sounds. 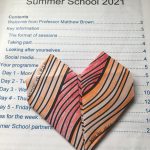 An origami heart designed by a student

Day three featured three more live interactive lessons. The first was run by various members of the teams involved in COVID19 research at the Trust. They were shown videos of three members of staff and met three more during the lesson. They took part in several polls via the website www.sli.do/ and asked lots of questions about research and the team’s experiences. They were then invited to take part in their own mock clinical trial.

The next session was an introduction to bioinformatics and students were given a short coding task to complete followed by a a debate on ‘How should we carry out research?’, facilitated by the team at the Department of Twin Research and Genetic Epidemiology.

For the Thursday morning sessions the Summer School attended a lesson organised by the team at the Cicely Saunders Institute of Palliative Care, Policy and Rehabilitation. Students took part in a virtual treasure hunt to find objects used to control common symptoms for those at the end of life. They also met several members of the team and learned about careers in palliative and end of life care. 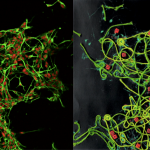 An image of developing neurons, recreated by a student using household objects

The afternoon was then led by the Centre for Stem Cells and Regenerative Medicine (CSCRM). A Clinical Research Career Development Fellow gave a talk on his work and the students then asked some really well thought out questions. They were then introduced to a range of interactive activities including #RecreateScience project which involved recreating images of stem cells using household objects.

The final day had just one final live lesson, which was an introduction to patient and public involvement. This was facilitated by the BRC’s Patient and Public Involvement manager and members of the Research Advisory Group.

For their final task, the students were asked to work in teams to produce a group presentation on their hopes and fears for the future, as part of the Utopia Now! project. The standard of work was exemplary and the panel were really impressed by the ideas the students came up with. 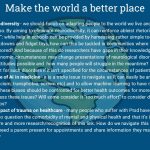 One of the group presentation slides

The very final session was a goodbye and thank you from the Deputy Director Biomedical Research Centre Operations. This was an opportunity for us to gain some more feedback and to field any last questions from students. Feedback from students and parents was extremely positive.  Several students have expressed an interest in joining the Young People’s Advisory Group so we can continue to work with them and get their unique insight into our work.

One of the students, Sara, said “I wanted to express my gratitude to you for organising this thoroughly informative and engrossing experience. Every session in its unique individual ways was inspiring and full of new facts and details that dazzled my brain”.

A parent said “My child talked about all the new things she has learnt through the summer school and I’m very grateful to all the organisers and researchers.””

For further information on the Summer School or on our work with young people, please contact Ania Rainbird.