The future of science told by children – Utopia Now!

Children from Lambeth and Southwark have had their sci-fi stories published by a research project exploring young people’s hopes and fears for the future. 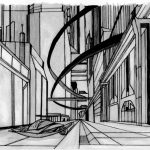 An illustration of a streetscape from one of the competition winners

Utopia Now! is a research project being delivered by the Population Health & Environmental Sciences team at King’s College London who are supported by our Biomedical Research Centre and the Research Design Service. The purpose of the project is to find out more about the kind of society that young people want to live in.

King’s College London’s Strategic Vision is to “make the world a better place” and the Utopia Now! project was set up to explore what this could mean for young people who are outside of the university. The team have worked with children and young people in Lambeth and Southwark for the past year gathering their thoughts, ideas, hopes and fears for the future.

One of the outputs of the project is One Day in 2070, a series of short stories written by young people about the future of science. These stories were judged by Stephen Oram, a near-future science fiction writer. Ten of the most creative writers were selected to take part in a virtual, creative writing day, exploring the world of the future with Stephen and researchers Christine Aicardi, Mackenzie Jorgensen and Jonny Jackson. 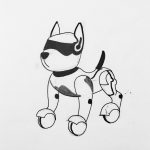 An illustration of a robodog from one of the competition winners

Children aged 11-14 were also invited to a series of workshops during February 2020 where they learned to tell a story on stage, write a play about the future and then perform in front of researchers at Theatre Peckham.

Caelan, one of the young authors, said “I really liked how you collaborated with professional sci-fi writers and professionals who are in the know about really cool technological things, because they help to shape my writing to include more advanced techniques as well as even more fantastical and wild technology, which I definitely hope will exist in the future, hopefully in a different context from my very much dystopian story.”

Hannah Cowan, one of the project leads said “The College asserts in its mission statement that the work we do here is ‘to make the world a better place’. But at the moment there’s not much detail, no shared understanding of what that better place is. What happens then is that researchers end up making worlds that they think are better. We need a wider conversation: What is this better place? A better place for whom?” 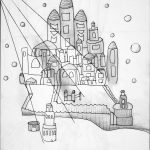 Charlotte Kühlbrandt, who co-leads the project with Hannah said “We called the project Utopia Now!, because we want to think big, and think with hope in this pretty hopeless time. We want to find ways to think about what the world might look like beyond our current systems and structures which people often assume will or even must stay in place, despite the ways in which they fail so many.”

The project is continuing to work using other creative methods such as Minecraft and filmmaking to explore young people’s hopes and fears for the future.