For Rare Disease Day 2020, we spoke to our Director Professor Matt Brown, an expert in the genetics of a number of rare diseases. He told us about why rare disease research is important and some of the challenges in this area.

What is a rare disease?

So far approximately 7,000 rare diseases have been identified worldwide, 80% of these are genetic in origin, affect 350 million people worldwide, and it is estimated that 50% of rare disease begin in childhood. 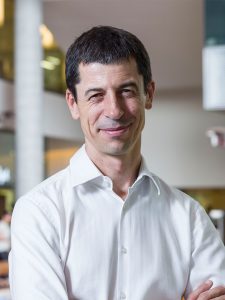 We are very fortunate to have a rare diseases specialist, Professor Matt Brown, at the helm of our NIHR Biomedical Research Centre. Matt is an expert in some quite rare diseases including scleroderma and fibrodysplasia ossificans progressiva, also known as Stone Man Syndrome.

Scleroderma is a chronic disease of the immune system, blood vessels and connective tissue. The first noticeable symptom can be hardening of the skin, as the body produces too much collagen. The excess of collagen can affect the skin, joints, tendons and internal organs. It causes scarring which stop affected parts of the body functioning normally. The condition has a prevalence of 0.04 -0.001% within the general population. Professor Brown has led a number of genetic studies into the disease, with a first in human treatment trial due to begin in the near future.

Professor Brown in also one of the main genetic researchers originally involved in identifying the genetic mutation responsible for causing the extremely rare and debilitating condition called fibrodysplasia ossificans progressiva, which affects just 1 in 2 million people. It causes damaged soft tissues and muscle to regrow as bone, ultimately causing severe disability. Identifying the gene for this disease took a global team of clinicians and genetics researchers over a decade. Nowadays with new approaches not requiring multicase family studies, and with advances in sequencing technology this would have taken a couple of weeks. Professor Brown has been instrumental in the development work which has enabled this new sequencing-based diagnosis of rare genetic diseases which is now routine clinical practice. This means many more patients with rare genetic diseases can get an accurate genetic diagnosis early in life.

Professor Brown said: “Research into rare diseases is a particular challenge as it can be hard for researchers to recruit enough patients to a project. Collaboration, both nationally and internationally, is absolutely key to make sure enough patients are involved for a study’s findings to be really robust.

“We’re incredibly well placed at our BRC to lead rare disease projects. With a strong history of research into rare conditions, and a dedicated Rare Disease Centre, we have access to world leading experts in a number of rare conditions.”

In addition to Professor Brown’s work, our researchers are involved in a number of national and international rare disease studies.

Dr Melita Irving is a clinical geneticist at Guy’s and St Thomas’ whose research focuses on achondroplasia, the most common form of dwarfism. She was the European lead for a global study of a novel medication for achondroplasia, showing it helped increase growth by 50%. This could help reduce the impact of health problems, and could mean that children don’t have to undergo surgery to counteract complications.

Professor Catherine Williamson, a consultant obstetric physician at St Thomas’ Hospital and Professor of Women’s Health at King’s College London is a leading clinical researcher in maternal medicine in the UK and internationally. She is also leading a national project to recruit women with the rare disease hyperemesis gravidarum (HG) to the NIHR BioResource, in order to understand the genetics underlying the condition. The study will be the largest of its kind in Europe.