Our researchers used AI to develop software called the Guide CRT platform. The technology works to identify the best location in the heart to fit a pacemaker during Cardiac Resynchronisation Therapy (CRT). The software was developed in a partnership between Guy’s and St Thomas’ Department of Cardiology, biomedical engineers at King’s College London and Siemens Healthineers. 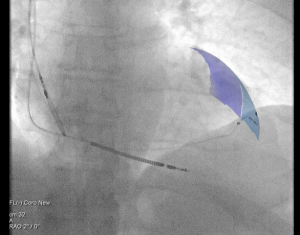 CRT is a common procedure offered to patients whose heart is not beating normally due to uncontrolled electrical activity. This means the organ struggles to circulate blood and oxygen around the body, leading to patients straining with everyday tasks causing tiredness, breathlessness and even fainting. A special type of pacemaker is fitted to ensure the contraction between the two chambers of the heart is synchronised to make it beat more effectively.

Most pacemakers have one or two wires to the heart, but CRT requires an extra wire that is more challenging to fit than the other wires. Up to one third of patients may not respond to treatment due to the lead being placed on scar tissue, which is tissue damaged by a heart attack. The electrical pulse from the pacemaker’s lead is significantly less effective in this tissue.

The randomised study, called Tactic CRT, is taking place at a state-of-the-art catheter laboratory in St Thomas’ Hospital. During the study, half of patients will have pacemakers fitted using the MRI guidance and the other half will not in order to assess whether MRI guidance improves outcomes.

Aldo Rinaldi, consultant cardiologist and professor of cardiac electrophysiology at Guy’s and St Thomas’ and King’s College London, said: “This is a very exciting trial as it could radically improve the lives of people with heart failure.

“For the first time we are able to accurately position a pacemaker in the heart which means we can avoid scar tissue in people with heart failure. The reason this is so important is that scar tissue is damaged tissue caused by heart attacks and this is less effective in conducting the electrical pulse from the pacemaker.

“This combination of imaging technologies means we can identify exactly where we want the pacemaker leads to be in order to maximise the electrical charge they carry in order to properly re-synchronise the heart.” 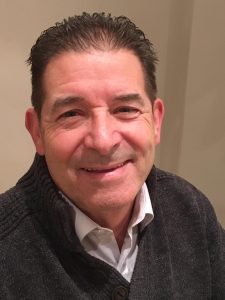 The first patient on the study was 68-year-old David Butler from the Isle of Sheppey, who has had four heart attacks and has been suffering with severe breathlessness.

In April 2019, he had a heart attack and was transferred to Guy’s and St Thomas’ where he was offered the chance to be on the Tactic CRT study.

David said: “I used to get tired very easily and was generally not well. I couldn’t walk very far before I would become short of breath and even having a shower and drying would be exhausting.

“When the cardiologist said there was this new pacemaker that could help and asked if I wanted to take part in the trial I said yes. I had the operation on the Friday and the next day I woke up and said ‘Wow, I feel great!’”

“Each day I feel better and better and last week I was on a building site and had to climb five sets of stairs and I was able to do it while younger people with me were tired.

“I have five granddaughters aged 1 to 18 years old. My aim is to live long enough to see them get married. I can’t praise the cardiology team and the nursing staff at St Thomas’ enough. They were fantastic.”