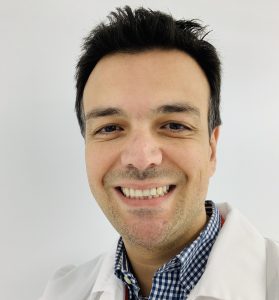 Frontal fibrosing alopecia (FFA) is a distressing skin disorder, occurring predominantly in women, causing skin inflammation, scarring and irreversible hair loss. Since the disease was first described in 1994 there has been a significant increase in its incidence world-wide, leading scientists and clinicians to conclude that the disease may have both environmental and genetic causes.

In a first ever genome wide association study into frontal fibrosing alopecia (FFA) of a total of 5,161 women in the United Kingdom and Spain, our BRC’s clinical academics and scientists have shown that FFA is caused by a complex immune-inflammatory response. They have identified four locations within the genome, where variations or mutations are believed to be strongly associated with onset of the disease.

The study identified a location within the HLA-B gene that is most strongly associated with occurrence of FFA. HLA-B is an important immune recognition gene. Variation in immune recognition genes may cause a response that results in auto-immune inflammation which leads to destruction of stem cells around the hair follicle, which in turn causes irreversible hair loss. The study also found that this mutation within the HLA-B gene may result in a five-fold increase in risk of developing FFA.

It also identified what could potentially be an environmental basis for the disease in a second genetic location of importance, CYP1B1 – a gene that codes for a metabolic enzyme that is involved in xenobiotic and sex hormone degradation. The scientists now plan to investigate what role sex hormones and other environmental factors might have in putting women at risk of developing FFA.

These discoveries provide a potential way to identifying women at risk of FFA along with the potential for new therapies. Dr Christos Tziotzios (pictured above), NIHR Academic Clinical Fellow at Prof John McGrath’s Genetic Skin Disease Group and currently Locum Consultant Dermatologist at the St. John’s Hair and Nail Clinic, who led the study said: “Our study is the first ever genome-wide association study into frontal fibrosing alopecia (FFA), a lichenoid inflammatory and scarring condition affecting almost exclusively women.  We have identified causal variants conferring susceptibility to this increasingly common and highly distressing disease, whilst some of our work has highlighted potential new treatment targets. We are very grateful to all our referring clinicians in the UK and Spain, all clinical and research staff, our patients and the National Institute for Health Research, for financially supporting our work.”

The study Genome wide association in frontal fibrosing alopecia identifies four susceptibility loci including HLA-B*07:02 has been published in Nature Communications and can be read here.