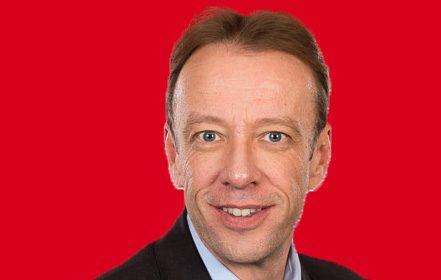 Professor Graham Lord, Director of the NIHR BRC at Guy’s and St Thomas’ and King’s College London, will step down from his role as Director in early 2019, to join the University of Manchester as Vice-President and Dean of the Faculty of Biology, Medicine and Health. He will also take up the role of Executive Director of the Academic Health Science Centre as part of Health Innovation Manchester.

Congratulating Professor Lord on his appointment to the University of Manchester, Professor Chris Whitty, Chief Scientific Adviser for the Department of Health and Social Care said: “I am extremely grateful for Graham’s contribution to the NIHR’s strategic goals over the last six years, driving systems leadership across health and clinical research, and his instrumental role in positioning experimental medicine at the heart of healthcare systems locally, nationally and globally”

Under Professor Lord’s Directorship the experimental medicine facilities within Guy’s and St Thomas’ and the BRC partnership have grown immensely to include the Experimental Medicine Hub at Guy’s Hospital with its cutting edge facilities, including the world’s first hospital-based GMP facility for the production of Advanced Therapy Medicinal Products (ATMPs) based within our NIHR Clinical Research Facility.

Sir Hugh Taylor, Chairman of Guy’s and St Thomas’ NHS Foundation Trust said: “Under Graham’s leadership our experimental medicine facilities within the Trust and our BRC partnership have grown immensely to include the leading-edge Experimental Medicine Hub at Guy’s Hospital. The BRC and its associated facilities have been key to the Trust becoming one of the highest recruiters to clinical trials in England. I would like to congratulate Graham on his new role and thank him for his contributions to research and development at Guy’s and St Thomas’.”

While acting as a catalyst to deliver new medicines and diagnostics, drive research and innovation into the NHS and build national and international systems leadership to ensure maximum impact for patients, under Professor Lord’s Directorship the BRC returned a five-fold increase on NIHR investment through leveraged research income. It changed clinical guidance for the treatment of common yet often fatal conditions such as peanut allergy in children, and developed diagnostics which are changing the treatment of leukaemia.

Speaking about his work within the BRC at Guy’s and St Thomas’ and King’s College London, Professor Lord said: “Our BRC has achieved an extraordinary amount in positioning research at the heart of healthcare provision, and setting the agenda for driving research into healthcare systems.”

He added: “I am extremely humbled to have been a part of this and would like to extend my thanks to all the colleagues across the NIHR, Guy’s and St Thomas’ NHS Foundation Trust, King’s College London and King’s Health Partners for their unwavering support and hard work which has enabled us to achieve this.

“I would also like to extend my sincere thanks to our patients, without whom none of this would have been possible.”