The team at Evelina London Children’s Hospital have been named as the top recruiting site nationwide for the CAP-IT trial. We spoke to the team to find out a little more about the study and how they’ve worked together to recruit the most patients of all participating sites.

Pneumonia is one of most common infections on the lungs in young children worldwide, and the most frequently used treatment is amoxicillin. Although the drug is known to be safe and effective, surprisingly little is known about the best way to use it. To address this, the CAP-IT trial is looking at the best dose and length of amoxicillin treatment in community acquired pneumonia in young children. 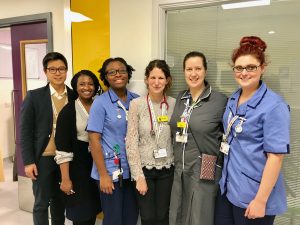 Through Dani’s leadership and the dedication of the CAP-IT research and the Children’s Emergency Department teams, the Evelina London site has been named as the top recruiting site nationally, enrolling 43 patients since the site opened in April 2017.

Dani said it had been a really rewarding experience leading the CAP-IT team.

“The support from the research and clinical teams has been phenomenal. I am really proud of Evelina London and can only put it down to the fantastic interface between research and clinical teams, embedding research into routine clinical care. Our recruitment is a testament to fantastic teamwork and I look forward to using my experience as Evelina London principal investigator for CAP-IT in other trials at the hospital.”

Shelley Mieres, Matron for Paediatric Research added “It has been fantastic to see first-hand the positive impact the paediatric research nursing team have made to this study. The leadership, organisation, coordination, support and teaching  provided by the paediatric research nurses (Alyce Sheedy, Mohammad Ahmed, Felicity Ballin and Roberta Woodford) to ensure that patients are cared for in line with protocol requirements against the highest standards of governance is outstanding.

“Once again, it reaffirms the pivotal contributions of research nurses in supporting evidence based practice. We will be aiming to keep flying the flag for the Evelina London at the top spot!”