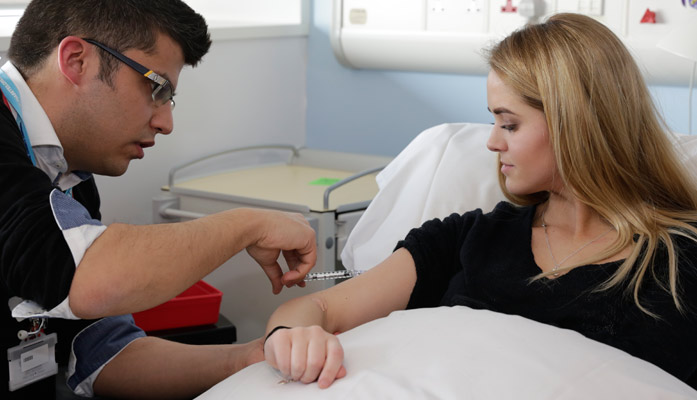 The search for a treatment for Type 1 diabetes (T1D) – which affects over 400,000 people in the UK – will be stepped up with the start of a new phase one clinical trial at Guy’s Hospital in London.

The new immunotherapy treatment, called MultiPepT1De, is being developed to target the autoimmune attack that leads to the development of Type 1 diabetes.

Type 1 diabetes is an autoimmune disease in which cells in the pancreas that make insulin are killed by the immune system. The new therapy, MultiPepT1De, will use fragments of proteins, known as peptides, in an effort to stop this process by ‘switching off’ the specific autoimmune attack, and hopefully preventing further destruction of the pancreatic cells.

In laboratory testing, MultiPepT1De is more powerful than the first generation treatment trialled last year and is designed to benefit a higher proportion of those with Type 1 diabetes than its predecessor.

MultiPepT1De will be trialled on 24 people with Type 1 diabetes by autumn 2016 and the study team is hopeful of positive results that build upon their previous findings showing that the first generation of MultiPepT1De, called MonoPepT1De, is safe and well tolerated, with some evidence of positive effects in T1D patients (see case study below).

Professor Mark Peakman, Principal Investigator at the BRC, said: “We are really looking forward to seeing the results from this new trial. What we are doing is a big step forward in precision medicine, taking a set of patients with a particular disease and genetic background and giving them an immunotherapy designed in the laboratory specifically for them. Obviously we will need to wait until we have the full results of the trial before we know if it is successful but at this stage we are hopeful.”

Dr Stephen Caddick, Director of Innovations at the Wellcome Trust, said: “Type 1 diabetes is a very serious condition that normally requires lifelong treatment with insulin therapy, but this promising new form of ‘immunotherapy’ could be set to change that. By retraining the immune system to prevent it from attacking insulin-producing cells, it may be possible to slow progression of the disease or even stop it in its tracks. If this approach is proved successful in larger studies it has the potential to transform the lives of people with Type 1 diabetes.”

In the last decade, the number of people in the UK with diabetes has risen by around 65 per cent to 4 million, according to Diabetes UK, with around 400,000 adults and children now suffering from Type 1 diabetes. Treating diabetes is estimated to cost the NHS around £10 billion per year.

MultiPepT1De is based on an area of study called peptide immunotherapy, which is currently being applied to a number of other diseases, including allergies and multiple sclerosis.

Jeremy Hunt, Secretary of State for Health, said: “This exciting new treatment has the potential to transform the lives of thousands of patients across the UK living with Type 1 diabetes.  Thanks to our strong economy we invest over £1 billion every year in health research, helping us to lead the world in medical innovation and give NHS patients the latest cutting-edge treatments.”

Among the patients who are taking part in the new MultiPepT1De clinical trial is Aleix Rowlandson, 18, a student from Trawden, Lancashire, who was diagnosed with Type 1 diabetes last September.

She said: “When I was first diagnosed with Type 1 diabetes I didn’t know much about it or what could be done to treat it. My family and I did some research and when I found out about the clinical trial I was delighted. Having spoken to the clinicians leading the trial and completed tests to check that I was a suitable candidate, I am now looking forward to starting treatment and seeing the results.

“I have already learnt a lot more about diabetes and I am very excited to be part of this ground-breaking trial. I hope that in some way I can help others who suffer from the disease.”

Another patient taking part in the trial is Natalie Worrall, 20, an aspiring policewoman from Herne Bay in Kent who developed Type 1 diabetes at 19.

She said: “Since being diagnosed with Type 1 diabetes in late 2014, it has become a big part of my life trying to deal with it and live a normal life. Although my symptoms are mainly controllable, I can get very thirsty when my blood sugar level is high and can experience multiple lows in the night that cause me to wake up.

“When I read the information about this new trial, it was immediately evident to me that I would benefit from being part of it. I am extremely proud to be taking part in it and fighting back against a disease that affects so many people around the world.”

Among the patients who took part in a study of the prototype peptide drug conducted in collaboration with investigators at Cardiff University (MonoPepT1De) that served as the precursor to this new trial is Jack Meaning, 29, an economist from Chislehurst in Kent who developed Type 1 diabetes at the age of 26.

He said: “I was diagnosed with Type 1 diabetes quite late in life and it came completely out of the blue. I had no known family history.

“I found myself losing weight and developing symptoms. I was very hesitant to go to the doctors at first but when I did eventually go, I was taken to hospital immediately.

“There was a lot to take in during the initial consultation but one of the things the consultant did mention was that there was a clinical research trial ongoing that may be an option for me. After the shock of the diagnosis died down, I realised that it was a good way to take back control of the disease while finding out more about it. Following some tests to check I was a suitable candidate, within a matter of weeks I was on the trial.

“I had to attend a clinic once a fortnight at the Clinical Research Facility in Guy’s hospital. I would normally go in early so I could fit it around my working day. They took blood and checked my vital signs. I was given an injection but I had no idea at the time if it was the new drug or a placebo.”

Jack, who became a father for the first time two months after completing the trial added: “Having a new baby really hones your outlook on these things. The trial was at the forefront of my mind as we prepared for the new arrival. It makes me want to do everything I can to help find a cure for the disease, particularly as my son may need help in the future.”