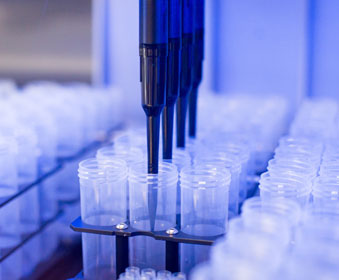 The BRC’s cell therapy research has been boosted by a landmark agreement.

Cell therapy is a prominent research area at the BRC, with work ongoing in a number of pioneering studies, including those investigating ways of reducing transplanted liver and kidney rejection and treating severe autoimmune diseases such as Crohn’s disease.

As we look to continue progressing in this field, we do so with the support of Miltenyi Biotec, a global biomedical research and cell therapy products firm.

The German company has signed a strategic agreement with the BRC, giving it access to Miltenyi’s tools relevant to cell therapy.

The BRC is the first academic research centre in the world to have access to a new type of cell sorter, which will allow the production of highly pure cells for infusion into patients. This will substantially increase the efficiency and safety of these cellular treatments.
BRC director Graham Lord said: “Experimental medicine is at the heart of our BRC and we are making huge strides forward in developing new ways to prevent, diagnose and treat human disease. This would not be possible without quality collaborations like the one we have established with Miltenyi Biotec.”

Jason Jones, manager of cell therapy and therapeutic apheresis at Miltenyi Biotec, said: “Cell therapy is a growing field and with the BRC we are working at the cutting edge of that. Over the next five years we should really see the work we are doing impacting on the medical industry quite significantly.”

Miltenyi is already collaborating with the BRC on several projects, including in the ONE Study, to assess cell therapy as a treatment to prevent kidney transplant rejection.

It is also involved in a similar study related to liver transplants, known as ThRIL. This tests how ‘regulatory T-cells’ found in the immune system can be manipulated to increase tolerance to a transplanted liver.

The BRC and Miltenyi are also working together on studies linking cell therapy to the treatment of inflammatory bowel diseases including Crohn’s. This has seen them jointly developing ground-breaking laser sorting technology.

Miltenyi has more than 1,400 employees in 25 countries and lists immunology, stem cell biology, neuroscience and cancer among its areas of expertise. It also specialises in clinical research fields such as haematology, graft engineering and apheresis.